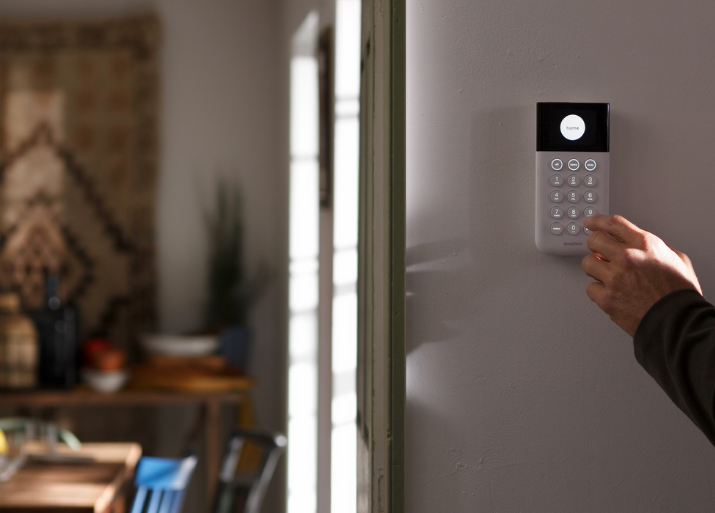 Nowadays, we don’t tend to give it a second thought when thinking of how to protect our home. We’re living in an age where we can easily buy a burglar alarm system and have it installed in no time. But what was it like centuries ago when we didn’t have the privilege of advanced technology to protect us from intrusions and burglars? We had to rely on the siren of a dog’s bark to alert us; often leaving them near the gates to act as guards.

How did we advance through the ages to where we are now? Let SimpliSafe take you on a fascinating journey of exploring home protection and security through time - right the way through to the incredible era we are in now.

The first ever burglar alarm system

Before 1700, animals were the popular alert systems for home intrusions - from watch dogs to pigs and geese - they acted as noisy and therefore very effective gatekeepers.

Then came the early 18th century, where the world started to shift in terms of technology and mechanics - set on course for the Industrial Revolution.

It was an English inventor, Tildesley, who was able to mechanically link door locks to sets of chimes - offering a new way of alerting business and homes of any entries. Ideas quickly spread and before you knew it, banks were installing more sophisticated alarm systems by using a tripwire that ran from a safe’s door handle to a cashier’s house nearby.

Fast forward a little to the mid 1800s, and thanks to a Reverend Augustus Russell Pope of Massachusetts - the first electromagnetic burglar alarm system was patented. This worked by reacting to the closing of an electric circuit with windows and doors connected as independent units by a parallel circuit. Any intrusion via windows and doors would close the electric circuit, causing one of the attached magnets in the system to vibrate, which in turn, caused a hammer to strike a bell. Incredibly clever if you ask us!

In 1857, Edwin Holmes bought the patent off Pope and brought it to the masses. Then the marketing of the electromagnetic burglar alarm system began in New York, and by 1866, Holmes had fitted around 1200 alarms to homes. It was then in 1877, that Holmes established the first network of alarms that were monitored by a central station.

Holmes’s business of burglar alarms was able to efficiently use pre-existing phone cables, meaning the business could rapidly grow.

Cut to the early 20th century and the Holmes burglar alarm business was sold to AT&T in 1905. The alarm systems were linked to emergency call systems, becoming the earliest monitored alarm system.

As time progresses, so does the advancement of technology, with more intelligent systems coming into play. The burglar alarm system became more sophisticated in the 1970s and 1980s due to the introduction of motion sensors in the 70s. They worked simply by emitting ultrasonic waves which if tripped, would trigger the alarm. The 80s saw the introduction of infrared technology to burglar alarms, tackling the problem of false alarms being set off. It was in this decade that the alarm system became more affordable.

2000 onwards to the present day

Over recent decades, it is near impossible to walk down a street or around a residential area and not see alarms fitted to homes and businesses, showcasing they have a burglar alarm installed. Thanks to the commercialisation and affordability, homeowners across the globe have been able to uplevel their home security.

One of the most intelligent advancements to the home security system is the monitored alarm system. Cleverly sophisticated systems now offer more peace of mind to homeowners who can go about their day, travel for holidays or be wherever they need, whilst the smart alarm system watches over the home for them - triggering an alarm and alerting police for dispatch on their behalf. The 24/7 monitoring system links with home security cameras to offer live feeds through laptops, computers and smartphones, also meaning that intrusions can be recorded for vital evidence. Check out our SimpliCam to see how this smart and most advanced, modern-day system works.

We’ve come a long way from the electromagnetic burglar alarm - sending vibrations to hammer a brass bell. Today, the smartest alarm systems offer incredibly advanced sensors; not just those that can detect motion. From water leaks, freezing temperatures (an early warning of potential bursting pipes) to shattered glass, smart sensors can now detect all these, and you needn’t worry about pets triggering off alarms as some smart sensors are programmed only to detect the unique heat signature of humans.

Times have certainly changed over the last few centuries, and it’s safe to say that we’re much better off for it when it comes to home security. The history of burglar alarms is a rich and varied one, with impressive technology for its time. Thankfully the systems in place now are much better equipped to deal with the issues faced by homeowners.